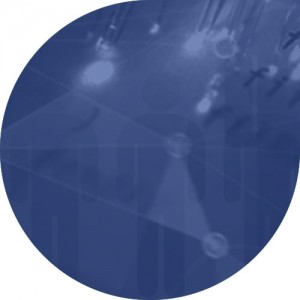 In GC-MS, the sample extract, after suitable sample preparation, is introduced into the injection port and immediately vaporised. The vapour is carried on to a glass capillary column whereby the analyte can be separated from other co-extracted compounds and sample matrix. The separation is dependent on the interaction of the analyte with the column phase as well as its physiochemical properties.

The GC-MS systems used at i2 can be set either to look for select ions or to screen a range of masses. The former enables much lower limits of detection to be achieved but is only suitable for analysis of know compounds (quantitative analysis). Screening the entire mass range, known as a broadscan, enables comparison of the sample against commercial and bespoke mass spectral libraries. This in turn enables an experienced analyst to determine the organic make-up of the sample (qualitative analysis). Currently the i2 MS libraries have over 680,000 unique compounds present and are still growing!

For a compound to be amenable to GC-MS it must be thermally stable and sufficiently volatile in order to exist in the gas phase. Generally the best compounds for GC-MS analysis are non-polar such as hydrocarbons although with prior derivatisation other compounds that would not be suitable are able to run on the GC system.

Typical compounds and groups analysed by GC-MS include: